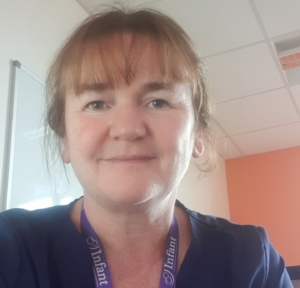 Mary joined INFANT team in September 2016. She is a registered general nurse with specialist registration in paediatrics and midwifery. On completion of her registration, she spent seven years in Australia, working in a wide variety of clinical settings and also in the area of education.

This included course development and clinical support for paediatric nursing students in the University of New South Wales. Once back in Ireland, she returned to clinical practice and further education.

Mary Anne’s research participation and interests are varied and  include clinical trials conducted in the neonatal unit in CUMH such as the Aerosurf study, double-blinded randomised controlled trial and the Petite study (a multicentre pen label single-arm study to evaluate the Pharmacokinetics, Efficacy and safety of Brivaracetam in neonates with repeated electroencephalographic seizures), electroencephalogram monitoring in hypoxic-ischaemic infants infants (ANSeR study), sleep in the preterm infant as monitored through EEG (SLEEPi study), and developmental outcome of mid to late preterm infants.

Mary Anne was also involved in research studies in conjunction with industry partners such as the NeoView study (exploring technologies which will give parents remote access to neonatal units) and the current Digest study (a study of gastric digestion and the development of a laboratory-based model to predict how food is digested).