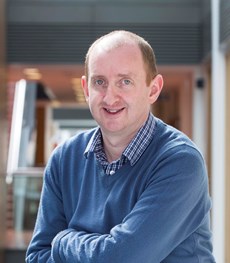 Gerard Clarke is a lecturer in the Department of Psychiatry and Neurobehavioural Science. His research interests include translational biomarkers of stress-related neuropsychiatric disorders, the impact of the gut microbiome on brain and behaviour across the life span and microbial regulation of tryptophan metabolism.

Gerard Clarke holds a BSc (Hons) degree in Chemistry, an MSc degree in Neuropharmacology (1999 and 2001; Both from NUI, Galway) and a PhD degree (2009) in Neurogastroenterology (Department of Psychiatry, UCC). Since 2012, he has held a faculty position as lecturer in the Department of Psychiatry and Neurobehavioural Science, University College Cork. Research interests include translational biomarkers of stress-related neuropsychiatric disorders, the impact of the gut microbiome on brain and behaviour across the life span and neuroactive metabolites produced from tryptophan. His work with INFANT and the APC Microbiome Institute marries these themes together with a focus on maternal stress and mental health, and the implications for neurodevelopment. He was selected for a young investigator award from the National Alliance for Research on Schizophrenia and Depression (NARSAD) in 2013 and from the American Neurogastroenterology and Motility Society (ANMS) in 2011. He has recently served as a management committee member for Ireland for the EU Cost Action GENIEUR (Genes in irritable bowel syndrome). He is a co-author of over 90 peer-reviewed papers (h-index = 34), 5 book chapters and has recently edited a book titled ‘The Gut Microbiome and Behaviour’.