INFANT PhD researcher, Soraia Ventura, will speak at an event aimed at students of clinical physiology and neurophysiology at the Escola Superior de Saúde in Porto, on Thursday 2 December.

Soraia will be speaking about her academic career to date, what it means to be a researcher and the INFANT Research Centre.

The event is the first of a series of seminars organised by Professor Diana Tavares, coordinator of the undergraduate degree in Clinical Physiology and coordinator of the Neurophysiology department at the School of Health at the Escola Superior de Saúde.

The overall objective of the series is to demystify and open perspectives on research to health students. The event will also see Soraia return to her alma mater, where she completed a B.Sc (Hons) Neurophysiology in 2011.

Her PhD project, titled Electroencephalographic Study of Sleep Architecture in Infants at Four Months, aims to understand infant Neurodevelopment through sleep markers and falls within the scope of INFANT’s BabySMART study.

Other speakers at the event include:

Catarina Castro, PhD candidate at Faculty of Medicine at the University of Porto. 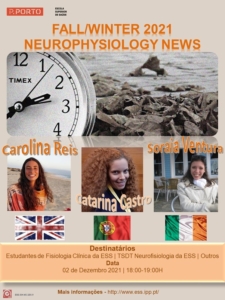